She had been experiencing a range of symptoms but dismissed thinking it was because of her gluten intolerance. 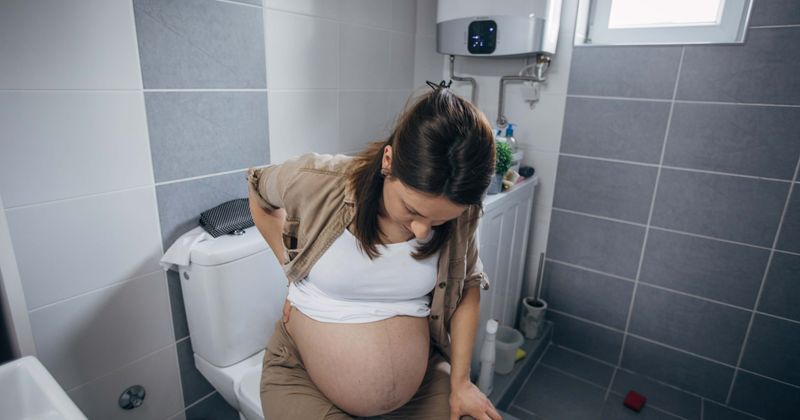 A woman shared her surprising story of how she found out she was pregnant on Reddit.

Caitlyn Bradley had been having digestive problems as well as bloating and heartburn. All of this is unpleasant, but it's not unheard of because she has celiac disease. She wrote in the Reddit post that has since been deleted, "I told myself I’d go to the doctor after the pandemic, due to fear of going anywhere near a doctors office during this time." However, she took a trip to the bathroom that offered a reason for all of the symptoms, reports Cafemom.

Pregnant women are turning their toilet seats BLUE - and a sweat disorder is to blame https://t.co/ywEfNvCG5O

She wrote, "We have a porcelain toilet seat in our downstairs bathroom that mysteriously turned blue the one day. Thinking it was my Young Living [toilet] cleaner I had just purchased, I tried scrubbing it off with no luck." She decided to search Google for advice, and the responses she received astounded her.

She wrote in her post, "All that popped up when googled were blog pages after blog pages of people talking about how pregnancy hormones turn porcelain toilet seats blue!" Bradley's unexpectedly blue seat prompted her to take a home pregnancy test, which confirmed her pregnancy.

She wrote, "[It was the] fear of not knowing at first how far along I was and if the baby was okay." She added, "My first thought was, 'Oh my gosh I need to see a doctor as soon as possible.' "

Speaking about her family's reaction, she said, "I think the best way to describe everyone’s reactions about the baby is complete shock. Shock because I was not showing up until this week." Bradley confesses she'd been somewhat bloated for weeks at the time she took the test, but she didn't appear to be pregnant. She went to the doctor and learned that she was actually seven months pregnant.

Bradley said, "The day we told everyone my mother-in-law told me I did not look pregnant at all, let alone 30 weeks! Of course, I had to tell everyone why I was telling them so late – how I had no symptoms and the ones I did have mimicked my gluten allergy."

Another complicating element, according to Bradley, is that she had been using birth control pills for a long time and had stopped having periods. As a consequence, she didn't notice that it had been almost a year since she had a period.

She said, "It’s just such a crazy story. A lot of people are just in disbelief when I tell them." She added, "Everyone is over the moon excited, but also just can’t believe how this all turned out!"

This news has been surprising for everyone in her family. Bradley said, "It’s definitely upped our spirits during this time and helped us forget about the not-so-happy times."

She said, "Yes, I didn’t know I was pregnant. But I knew something was up, and thought I was having issues with my body due to my gluten intolerance."

Angela Ballard, a registered nurse with the International Hyperhidrosis Society, said that it could be due to a condition known as chromhidrosis.

"Chromhidrosis is a rare chronic condition that causes sweat to have a color like black, blue, green, yellow, or brown. It causes emotional and psychological distress like feelings of hopelessness, worthlessness, helplessness, guilt or pessimism. It can also lead to insomnia, a decrease in energy and irritability. It is a chronic yet harmless condition that is more visible after puberty," per Medical News Today.

She added that she's also learned the importance of listening to her body and not dismissing any symptoms. "COVID-19 played a part in me not going to the doctor to get checked out, but I am also the type to try and shrug things off. This has made me realize that when I don’t feel right I need to go to the doctor, and not put it off. I could have found out about my baby a lot sooner!"