The couple aims to fly to Germany where Oksana Balandina will receive prosthetic legs and undertake rehabilitation. 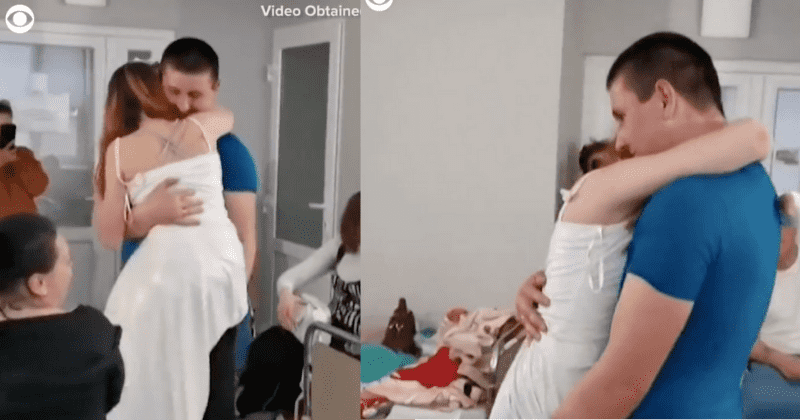 A Ukrainian couple got married on Monday with a very special and heartwarming first dance.

Oksana Balandina and Viktor Vasyliv got married in a hospital in Lviv in a beautiful moment in the otherwise challenging and devasting time due to the ongoing Russian invasion. In an unfortunate incident on March 27, Balandina was injured in a landmine explosion while walking toward home in Lysychansk. They were on a familiar path toward home, according to the Lviv Medical Association.

These newlyweds shared their first wedding dance in a hospital in Lviv, Ukraine, recently. 23-year-old Oksana Balandina is recovering after doctors had to amputate both her legs because of injuries she sustained when a mine exploded while she was walking home in March. pic.twitter.com/7iWT7Fb9Ms

At the time of the explosion, she was able to alert Vasyliv, who was following behind her and escaped unharmed. She told Reuters, "I only managed to shout to him [Vasyliv]: 'Honey, look!' " She added, "He looked at me when the mine exploded. I fell down with my face on the ground. There was an extreme noise in my head. Then I turned around and I started to tear off the clothing on me. I thought it would be easier to breathe because there was not enough air."

Vasyliv said, "When it happened, I gave up in despair, I did not know what to do. I saw her not moving." He added, "If it was not for Oksana, I don't know what would have happened. She is so strong. She did not faint. It was Oksana who coordinated our actions." Balandina has had four operations since then, and both of her legs, as well as four fingers on her left hand, have been severed, according to Sky News.

In a hospital ward in Lviv, Ukriane, newlyweds Oksana Balandina and Viktor Vasyliv, are finally sharing their first wedding dance.

However, she said, "But thanks to the support, I accepted it. I need to keep living. It is not the end of the life. If God left me alive, that's my destiny." Her two children, a 7-year-old son and a 5-year-old daughter, are now safe in the Poltava area of central Ukraine with their grandparents.

The couple got married in a civil ceremony at the Lviv Surgery Center on Monday. During their first dance, Vasyliv lifted Balandina into his arms and turned her around between the hospital beds, while she wrapped one arm around his neck and placed a bandaged hand on his chest in the video clip from the ceremony. The Lviv Medical Association told Sky News, "Life should not be postponed until later." The couple had not gotten time to get married in six years of being together.

Watch: Oksana Balandina and Viktor Vasyliv celebrated their nuptials at a hospital in Lviv, marking a happy moment amidst what has otherwise been a challenging time#UkraineWar #wedding #dance #Lviv https://t.co/YSmfdHJd8C pic.twitter.com/TrY5UKAlJq

Following their hospital wedding, the pair hopes to fly to Germany, where Balandina will receive prosthetic legs and undertake rehabilitation. She said, "I want to go back to our town, to Lysychansk, but frankly speaking, I am worried for my children. When the war is over, there will be so many things happening. The road was mined… It is scary."

Vasyliv expressed gratitude for each day he spends with his new bride. He said, "I was afraid to lose her. I wanted to cry, but I could not cry. I was shocked, I could not comprehend that it was happening indeed. It was terrifying to lose the person I love."