The TikTok user narrates their experience of being in a swim-up bar in California. 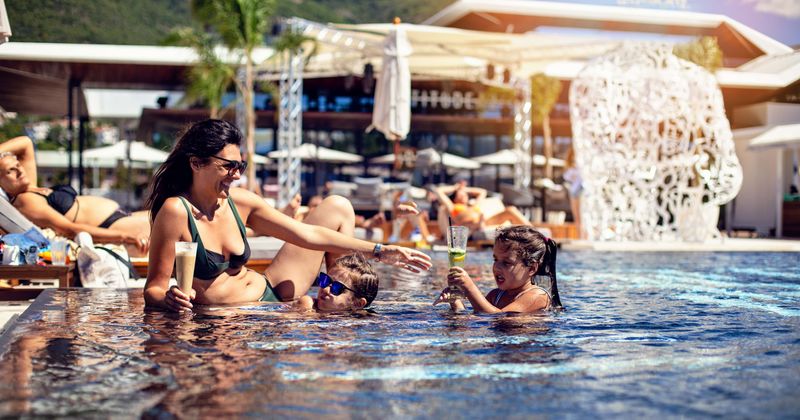 A TikToker is warning people against spending too much time in a swim-up bar in a viral video.

The video is captioned, "pro tip: avoid the pool with the swim up bar" and is 8 seconds long. The video posted by @twofoodpiggies shows a group of people enjoying a drink at the resort's swim-up bar in Baja, California. However, as they discussed in the voice-over, things were not as calm as they looked in the clip. They said, "Vacation pro-tip, do not hang out in the pool where the swim-up bar is." They added, "There was literally intoxicated guests admitting that they were peeing in the pool here."

I stand by my peeing in the pool comments. Based both on science and my life as a ten year old. pic.twitter.com/i6iQuzcemT

In the video's description, they also expressed dismay at the unclean environment, per Comic Sands. They wrote, "One girl didn't understand why some people were leaving the the pool to use the washroom." The viewers were not surprised and expressed that they expect people to pee in the pool all the time. A user commented, "I am one of those intoxicated guests peeing in the pool." Another one said, "As a collegiate swimmer, I promise we all peed in the pool everyday."

The video has gathered over four million views until now. However, some users were absolutely disgusted with the people's confession in the comments. A user wrote, "The amount of people admitting peeing in a pool in this comment section disgusts me." Another said, "Noticed this the first night in Mexico, when the lights were out and the pool lights were on, the swim up bar was yellow."

According to one anonymous poll, 19% of individuals acknowledged to urinating in a pool at least once. Professional swimmers have admitted to being among regular violators, reports The Guardian. In another survey by Water and Health, 30% of pool owners had admitted to peeing in their own pools.

Those figures, Two food piggies subsequently said in a follow-up video, aren't enough to persuade them to ever use a swim-up bar again. They began the video by confessing that individuals urinating in the pool is, regrettably, a rather common occurrence. They further said in the video, "They don't really need to go anywhere, they just want to save their spot at that pool there, vs. another pool there on the Riu property, where people are going in for a couple minutes and leaving."