She explains how tourists are often disrespectful to the rules laid down to protect endangered animals and environment. 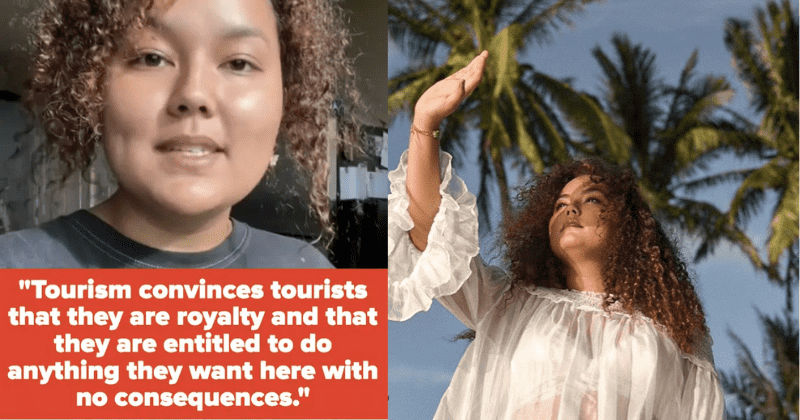 A native Hawaiian woman is urging people to stop visiting her homeland to avoid the destruction that is being caused by tourism.

Lily Hi'ilani Okimura lives in O'ahu, Hawai'i, and has over 83,000 followers on TikTok. She makes videos about the issues affecting Pacific Islanders and one of them is tourism. The islands of Hawai'i welcomed a record 10.4 million visitors in 2019 and these numbers predictably declined in 2020 but exploded again last year as the pandemic restrictions were lifted. Despite a global pandemic and increasing voices of indigenous people demanding visitors to leave, over 6.7 million people visited the islands in 2021.

Okimura spoke to Buzzfeed and revealed that the main reason for this outcry to stop tourism is because visitors are deeply disrespectful. She said, "A lot of tourists treat our land like it's some theme park." She added, "They will ignore warning signs, fenced-off areas, and 'no trespassing' signs, which can cause damage to our environment like erosion, vandalism, and pollution."

Okimura gave some examples of how these visitors often break rules and exploit the environment. She said, "tourists will try to go near and touch monk seals and turtles at the beach, despite having MULTIPLE signs at our beaches warning people that these are endangered species and touching them will result in them paying a fine."

A couple from Louisiana was penalized for handling an endangered monk seal last year. They were fined $500 after a video of them touching the seal was posted on social media, per ABC News. Touching or harassing a Hawaiian monk seal is illegal under state and federal law. Up to five years in jail and a $50,000 fine are possible penalties.

Okimura made a TikTok video pointing out the numerous signs warning people not to mistreat the animals. She said in the video, "If you can't be bothered to respect the place that you're going to visit, then you can go back home." She also gave some suggestions to people visiting the Islands on how to be respectful towards the environment and native people. She said, "If you have family or friends who live here, see if you can stay with them during your visit rather than giving money to the hotel industry and especially Airbnbs, which are majority-owned by non-residents."

She added, "Don't spend all of your time in Waikīkī and other tourist traps. Actually see Hawai'i. Experience our culture: Take time to learn some ōlelo Hawai'i." She further suggested, "f you want to learn hula, make sure to seek classes/lessons from a Kumu Hula (a hula teacher). Buy from Native Hawaiian-owned and locally-owned businesses and restaurants. And finally, leave things how you found it."

She urged people to pick up their trash and not take any rocks or sand back home. She believes that through these ways they can be more respectful and adopt ethical tourism that will not harm the environment and natives involved. She clarified that Hawai'i only started relying on tourism when it forcibly became a part of the US territory.

She further elaborated on why the native people are asking tourists to not come, "the indigenous people and other residents are asking visitors not to come due to a worldwide pandemic, our limited resources, and because our tourism industry exploits our people and culture."

She added, "Native Hawaiians are the first human inhabitants of Hawai'i, and this is our home." She also stated that it is their responsibility to take care of their ancestral land, "We consider ourselves stewards of the land, and it is our kuleana, our responsibility, to take care of it, because in return, it takes care of us."