He had run away from home a year ago and could not afford to feed his dog, Jada. 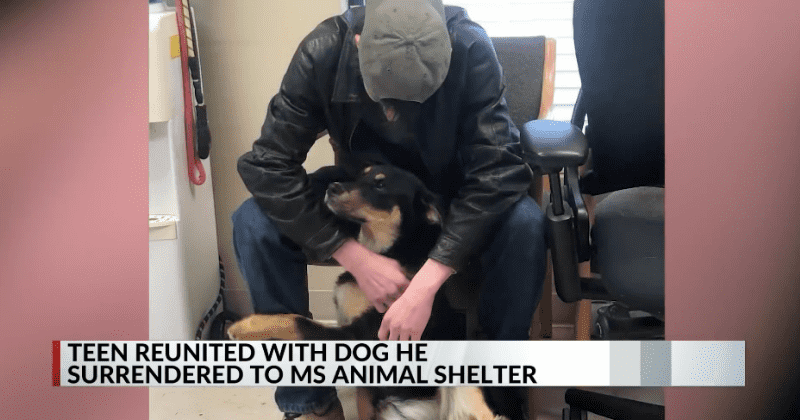 A homeless teen has been reunited with his dog after the community came to his aid. The teen who has requested to be anonymous arrived at the Senatobia-Tate County Animal Shelter, with just one simple request.

Kris Robinson, Interim Shelter Director told WREG, "I was just sitting up here in the office and had just finished some cleaning, and saw a young man walking across the field with what looked like a dog in tow." He added, "He came in and he asked if he could leave his dog here and I said, ‘Buddy, we are so full.’ And he said, ‘Well, I can’t take care of her anymore.’ He said, ‘I live under a bridge,’ and it broke my heart.”

She said his humble request compelled her to make space for his dog, a Rottweiler/German Shepherd puppy named Jada. Robinson claims the young guy informed her he left Jada in a tent while he went out looking for employment and that she had broken out. He no longer could afford any kind of shelter and was not able to feed his dog. Robinson said, "So he asked if we could take her and I said, ‘Of course,' " Despite the shelter's inability to accommodate Jada, Robinson consented to accept her and posted about the incident on Facebook.

The post reads, "This is where she layed [sic] after her owner surrendered her today with her plastic bag of dog food and a blanket. She is devastated. I can’t be mad at her owner though. He is 17, says he lives under a bridge in Tate county. He WALKED her all the way to the shelter and asked us to please take her because he can’t afford to keep her. She’s about 4 mos old and she kept herself pinned to his legs while he was here. We are full but how could we not take her in."

After reading the post, several people came up with overwhelming support for the teen and his dog. Robinson was moved to tears by the insurmountable support. She said, "For this young man to just be 17 and down on his luck, and no matter what problems he’s facing, he still took the time to walk her over her and make sure somebody was going to take care of her." She says that this shows a lot about the character of the kid.

The adolescent filled out a surrender form with only a few details about himself, which Robinson was able to pass on to those who could assist him. The city does not have an official homeless shelter, but Senatobia police were able to identify the young man and assure his safety with the help of many community members. Local churches have provided support, and he has been provided with a temporary residence at someone's home while he figures out his living position. He's also reunited with Jada.

Seeing her son on News, the teenager's mother contacted CBS to relay that he had run away from home one year ago. He has been missing ever since. She told the outlet, "I don’t care about the past. I just want my baby, and anybody should understand that when they lose a child and he’s still alive and he can come back at any time."