Knisley told her on their third date that heart failure was common in individuals with his kind of muscular dystrophy and he didn't know long he would live. 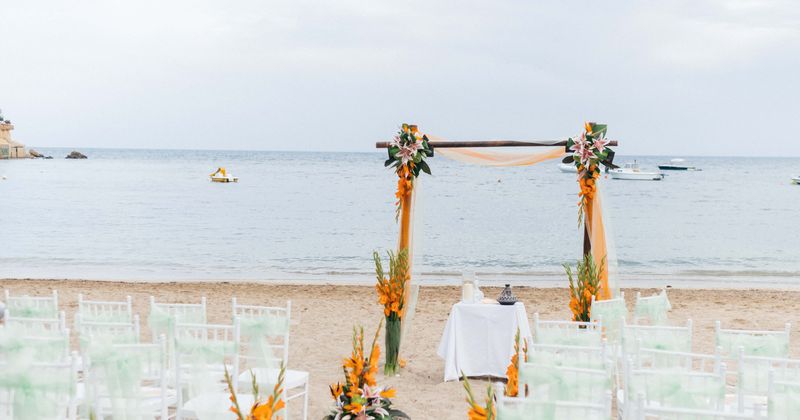 Hunter Knisley, who was given only weeks to live by the doctor, married his fiancée in their dream beach wedding.

Knisley, 27, was diagnosed with Becker Muscular Dystrophy at the age of eight, a disorder comparable to Duchenne Muscular Dystrophy but more uncommon and slower to progress, reports PEOPLE. He told the outlet, "When I started playing T-ball, I ran different than the other kids and I was a lot slower."

His connection to his wife, Emily Draper Knisley, dates back to the day they were born. Emily was born at Fairfield Medical Center in Lancaster, Ohio, only four hours after Kinsley. Their social security numbers are only one digit apart due to this proximity. She was one year behind her present husband at Sheridan High School in Thornville, Ohio.

"She's the love of my life," Knisley said.

"I thought he was adorable," Emily said. The feeling was mutual. Knisley said, "I was so shy and I didn't say anything to her," remembering how he struggled to reply when she tried to talk with him because she was "so pretty."

TONIGHT: After recieving a terminal diagnosis, Hunter Knisley had one wish - to take his family to Myrtle Beach and marry the love of his life. Tuesday night on ABC15 News at 6, hear Hunter and his now wife, Emily's, powerful story. https://t.co/pbyBf1CNLp pic.twitter.com/3urt0XGfMf

However, a decade later in January 2019, he saw a picture of Emily on his Facebook feed and decided to approach her. They became friends because they both liked Destiny's Child, the Backstreet Boys, Johnny Depp movies, horror movies, and Harry Potter.

In March 2019, they went on their first date and Knisley's sense of humor impressed Emily. She says, "He's quirky and he's a really good guy."

"We click," Knisley adds. "And she's gorgeous. I can't stress that enough. She's just a really good person and just wonderful to be around."

Knisley told her on their third date that heart failure was common in individuals with his kind of muscular dystrophy and he didn't know long he would live. "I was very up front with her about it," Knisley said.

Emily thought this would also affect the two girls she had from a previous relationship. But after contemplation, she understood there are no guarantees in life, no matter who she ends up with.

In November 2019, the couple and Emily's daughters, Delanie, 6, and Delilah, 4, moved in together in Junction City, Ohio.

A 27-year-old father to three, Hunter Knisley, was given just weeks to live after a lifetime battle with Becker muscular dystrophy and recently another painful side effect — heart failure.https://t.co/5lwzEogfEp

"I loved being able to wake up every day and be with them all," Knisley said.

He proposed in December 2020 but Emily's divorce was not complete, so they couldn't be married. Instead, they tattooed wedding bands on their ring fingers with each other's initials.

Emily gave birth to their first son, Maverick, on March 22, 2021. Doctors had told Knisley that a son to him will be born healthy but a daughter can be a carrier.

Knisley said, "I've always wanted a son. It was my dream."

Knisley had a standard echocardiogram at Nationwide Children's Hospital about a month ago. He had been already hospitalized three times this year. "I was feeling great, better than usual," said Knisley.

However, his doctor told that he was in end-stage heart failure and only had weeks to live. He was admitted to the hospital immediately. "I was shocked," Knisley said.

"It was like a stab in the heart," Emily said. "I couldn't breathe, it was awful — not what we were expecting at all."

Knisley stated he wanted to be married in Myrtle Beach, South Carolina, and take his kids to see the ocean when doctors asked if he had a final wish. Emily said she called her attorney and pleaded with him to finalize her divorce so she could marry the love of her life before he died.

A 27-year-old father to three, Hunter Knisley, was given weeks to live after a lifetime battle with Becker muscular dystrophy, but that wasn't going to stop him from seeing his bride walk down the aisle. https://t.co/TzusxHkFB1

"Knowing that I had a limited time left, we just knew that we wanted to be married to each other," Knisley said.

They went to the courthouse and were legally wed on April 14. They were able to plan their beach wedding with the help of Parent Project Muscular Dystrophy who connected them with Myrtle Beach wedding planner Amanda McDowell. McDowell planned the wedding ceremony which happened on April 21st with no fees and with the help of donations from the community.

Knisley described their wedding ceremony as, "Everything I ever wanted." Their first dance was to "Me and You" by Kenny Chesney. That moment, says Hunter, was "the happiest I've ever been." Emily agrees.

Emily said, "People that we've never met, that didn't owe us anything, did so much for us, and it was perfect."

Emily surprised her husband last Saturday by fulfilling another of his dreams of watching their son play football. Knisley is spending the time he has left crafting, watching movies, playing with the kids and listening to Emily sing. "It's like an angel," he says of her voice.