13-Year-Old Boy Will Soon Start His Ph.D. in Physics But He Needs Help To Pay For College

His parents are trying to raise funds for his tuition fees on GoFundMe. 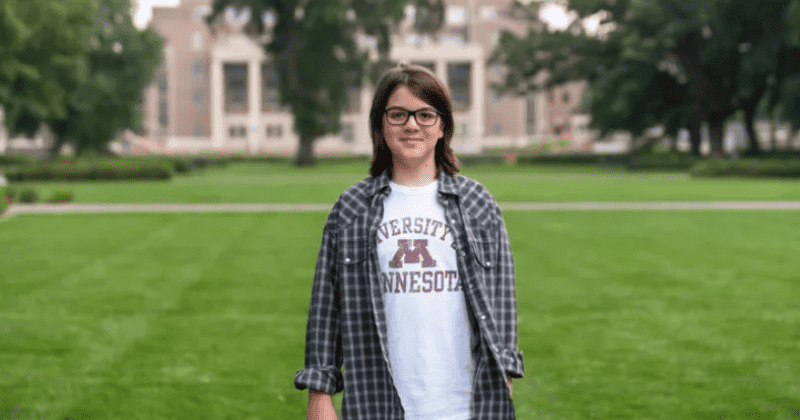 A 13-year-old child graduating from the University of Minnesota is soon to start his Ph.D. in Physics. Elliot Tanner will graduate from the University with a bachelor's degree in Physics and a minor in math this semester. He'll be back at the university in September to begin his doctorate in physics, per My Modern Met. Tanner's parents spotted his talent when he was three years old and already reading and performing arithmetic. He graduated high school at the age of nine after many years of homeschooling and then went on to college.

Tanner spoke to Fox 9 his experience of being in college at such a young age. He said, "Sometimes there is sort of a ‘wow’ period for a week or two and then everyone just kinda gets used to seeing me in class, and it becomes a normal occurrence." Michelle Tanner, the child's mother, says, "People who hear Elliott’s story say he doesn’t get to be a kid, or he grew up too fast. He still very much is a kid and the only difference is he goes to school in a different building."

Tanner is just any other 13-year-old who likes to play Minecraft, listen to music, and plays with his friends. Considering the future Elliott has been accepted into the University of Minnesota's Ph.D. program in Physics, and his parents are now attempting to figure out how to pay for it.

Michelle said, "We're just trying to explore all our options, and coming up with dead ends. Trying to apply for any scholarships, fellowships, grants, and we have not been successful." Due to the fact that he did not obtain a tuition waiver or financial assistance package, Tanner's parents have created a GoFundMe campaign to help fund his education. Elliott aspires to be a high-energy theoretical physicist and, eventually, a physics professor at the University of Minnesota.

His mother wrote on the Campaign page, "Only 3% of incoming physics Ph.D. students in the U.S. do not receive a tuition waiver and/or financial package." The tuition fees is "roughly $20,000 per year and the average length of the theoretical physics program at the UMN is 5 years." They have been able to reach their goal for his tuition fees for the first year because of the community aid. They have now set the goal to raise funds for his second year as well.

Michelle also expressed her gratitude to everyone that contributed to Tanner's education. She wrote, "We are so incredibly thankful to everyone that helped support Elliott in hitting his initial goal of raising tuition for the first year of his Ph.D. Program! We are at a loss of words for all the encouragement, support, donations, and kind words."

Elliott, who is pals with Young Sheldon actor Iain Armitage, believes that his narrative will inspire others to be interested in physics. He said, "I would love to be able to spread some of this joy for physics and this enthusiasm for it around."